Go to your personal area

The train is an asset of and for everyone, and those who harm it not only affect Trenord, but also the staff and other travellers.

An average of 2,400 damaged or broken seats; 540 shattered windows; more than a thousand sunshades removed or torn; over 6 thousand glass breakers stolen on Trenord trains each year. In 2022, Trenord teams removed more than 219,000 square metres of graffiti: this action alone cost the company 1.5 million euros.

Cleanup and restoration work incurs substantial costs to the company, in addition to those resulting from unplanned train downtime for maintenance.

Vandalism is a problem for everyone: if you witness an incident, report it immediately to staff on board the train or at the station. Only everyone's efforts will help make everyone's journey smoother and more enjoyable!

Temporary covers for vandalised seats
In January 2023, Trenord's Cleanliness and Decorum team devised an initiative to make it obvious to travellers why some seats on board are not usable: during the end-of-ride cleaning of trainsets, temporary seat covers that signal to the passenger that the seat has been vandalised are placed on seats damaged by vandalism.

The covers remain on the seats for as long as it takes for the train to return to the depot for the replacement of the cover or the entire seat.

Video in italian only 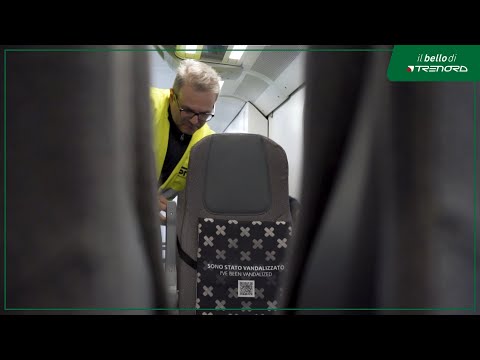 To know us better

To be up to date

To plan your trip